17 th may fall all over the world not only india 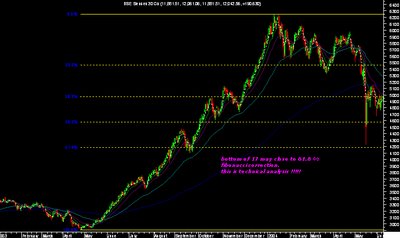 hey if u check this chart the fall on 17 th may nearly kissed
the 61.8 % correction level and bouced back and similar has been the case for all major falls since 1979 on the sensex. also if u check that all markets around the world were down badly and they did not have elections.

also elliot wave analysis has it basis in fibonacci ratios. Well u may feel taht its a coincidence but how many times i have seen 2 -3 big previous falls on the sensex and bounce bakk frm 61.8% level so coincidence cant be again and again