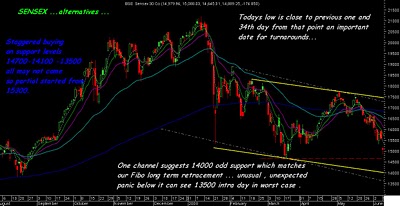 Sensex has just made a new low below March lows but very close to it .

Some of the technical factors currently
1) There are possibly two channels on the short term on taking different lines. Supports accordingly are placed at 14000 odd and 13500 . According to the long term fibonacci retracement 14100 odd is 38% level so good support could be seen around those levels.
In unusual or unexpected selling due to some factors comes in coming days 13500 is the support
which would hold intra cracks in worst case.

2) Previously some time back had stated after April 2nd week we would see stability and we saw a good 2000 points move to 17700 after that. The same analysis was based on Fibonacci time series which is not an accurate study . According to that June 10 is 34th day from the 14677 bottom and we could see a turnaround bottom around this date.

As there are no of factors around this zone of 14100-14700 the view is to go staggered in buying then to try to catch exact bottoms which is not possible ideally. Also not all stocks will make a bottom with index bottoming out.