By Nooresh In Technical Analysis Last Updated On: 29/03/ 2010
Its been a long time since we saw DOW cracking 200 + points and Nooresh making a post on the same. Also Sensex did not look at Dow for direction which almost made us forget DOW 🙂
The 200 pointer definitely makes a bad dent on the Dow chart but at the same time the index is now closing in on strong support zones.
10300-10350 is a short term trendline support. Also 10200-10150 zone needs to be closely watched to signal a change of trend. As of now we are coming to the zone but the next few sessions would give more clear signals.
Ideally one could expect a nice little bounce from the zones. So fingers crossed and watching.( Check charts posted below )
Sensex the chart has been posted just below this post which clearly shows 16600/16800 are the levels to watch for the reactions. Next few sessions would give clear signals. 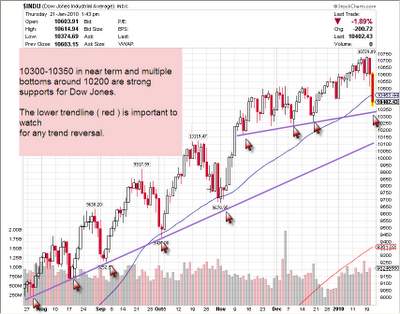 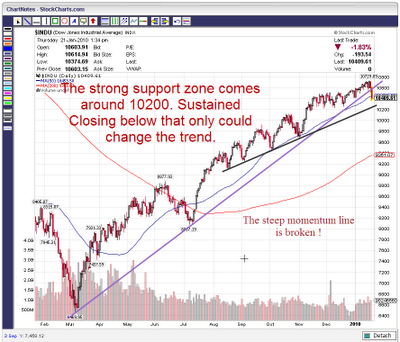