Find attached below the Presentation done at Thane.

Has a few additional stock recommendations 🙂

Sensex hit a new high for the year today and suddenly people on the street are not ready to believe it :). Well i had mentioned about the way broader indices have already given a breakout in July ---

Many of the people have been eagerly waiting for the update on Sensex after todays move --- Everyone has the question Market Kya Lagta Hai ?

Market accha hi lagta hai. As i have been mentioning my favored scenario is 20500 being reached in the next 6-9 months. Downsides to 17800/17200 were mentioned. We did see a dip to 17800 confirming the minimum dip needed. 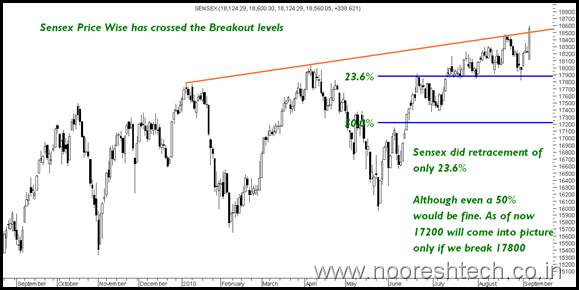 In the last moves between 15500-18000 the upmoves were for 40-45 sessions and downmove for 20-25 sessions roughly. This basis made us time the markets exactly last few times.

This time around Sensex has already surpassed 75 sessions which clearly indicates the Pattern of Flip Flop is no more and we will have a big Directional Move in coming months.

In the last 1 year market has been in Parallel Channels. As of now we can confirm a breakout for the index once it starts closing above 18600 levels. The Channel size has roughly been 2500 points.So if we consider the breakout then Sensex should go towards 21000 over the medium term on confirmation.

As of now its a higher top higher bottom formation.

Many of us may feel valuations look stretched !! - Is it because they were highly suppressed a year back at 8-10k levels ? Or is it the hangover of the big drop in 2008 which is keeping everyone cautious and fuelling the current rally?

Well as a Technical Analyst i am not supposed to answer the above questions 🙂 and stick to what the Charts Tell. So till i dont get a negative signal from them will continue to stick to the Bullish View.

Will review around 18800-19000 which remains a short term resistance. Previous top after the fall of Jan 2008 is around 18900. Short term trendlines around those levels.

Ideally a time wise review comes around Sept end.Till then Enjoy the ride 🙂