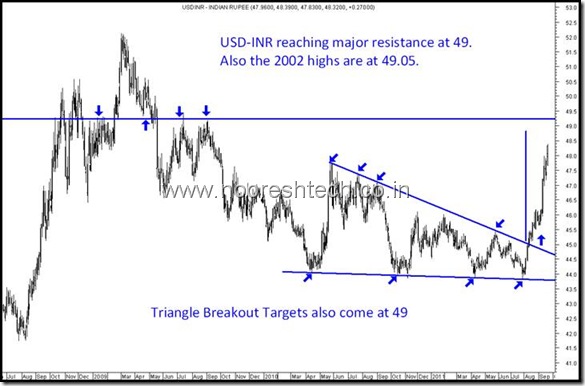 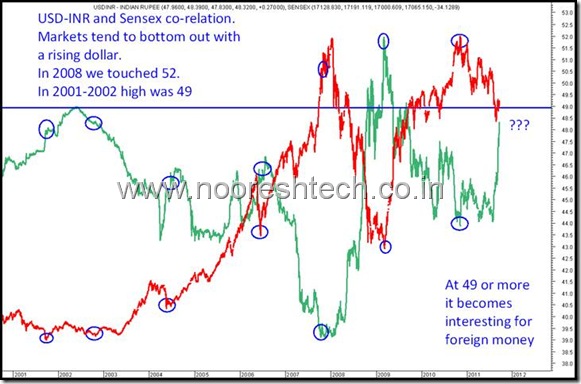 If we try to compare various peaks/troughs( shown by blue circles ) on Sensex with USD-INR its generally seen major bottoming out formations have come with a spike in USD-INR. Comparing the current correction with 2008 it is seen that a dollar spike between 49-52 creates a very important long term bottom.

Also one thing noted is USD-INR has never stayed above 49 levels for more then a few months. The max period being 1st half of 2009 when markets bottomed out and we saw a lot of foreign money coming in post that.

Looking at a similar comparison possible scenarios would be as below

a) USD-INR tops out at 49-49.5 and Sensex is pretty close to important bottom.

b) USD-INR sees a spike to 50.5-52 with a panic like scenario in Sensex taking it sharply down for a short jerk.

The USD-INR relation suggests that next few months could be a bottoming out phase for Indian markets ideally with a possible top at 49-49.2.

In a worst case scenario we may see a spike in USD-INR to 50.5-52 with possible negative global announcements but such a crisis phase has not lasted more then 3-5 months. The strategy should be to increase equity exposure in panics.

On a simpler note for alll the readers sitting out of India the next few months are the best time to transfer money slowly over the next few months. With very high interest rates in India even if US dollar runs away to 52 the Interest Rate will take care of currency risk. Just my view no idea on tax or transaction charges 🙂