CEMENTS —–The next sector to watchout for ??

Over the last 3-4 months there has been specific sectors which have outperformed the Index.

We had earlier initiated a view Telecom stocks like Idea at 70, Bharti at 360-380.Later the focus shifted to Auto – Bajaj Auto at 1500. Now it seems Cements will be the next sector to watchout for.

We have been maintaining out long call on Cement stocks since last 1-2 months.

Yesterday had mentioned about ACC.

Posting the other two charts which are interesting. Also have been recommending Grasim from lower levels.

We are also looking into Midcap/SmallCap Cements. Logically this sector is less affected by Global Concerns. 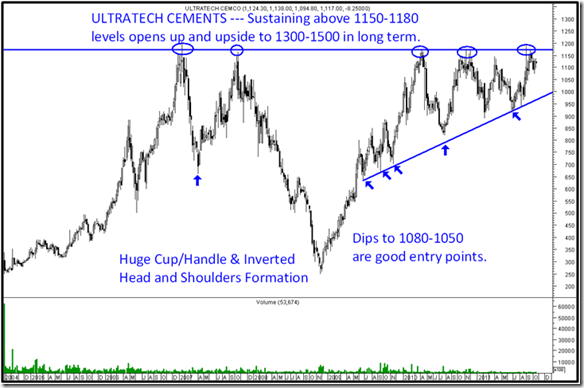 è The stock is forming a huge Inverted Head and Shoulders which gives a target projection of 1400-1500 + over the long term.

è Multiple attempts have been made at the resistance band of 1150-1180 over the last 1 year. Considering the fact that it has attempted 3-4 times already and is making higher bottoms indicates the stock may breakout above 1180 over the next few months.

è Strong supports are placed at 1050 levels and any dips closer to that should be a point to add more to the stock. Momentum will be seen in the stock once it starts closing above 1150-1180. 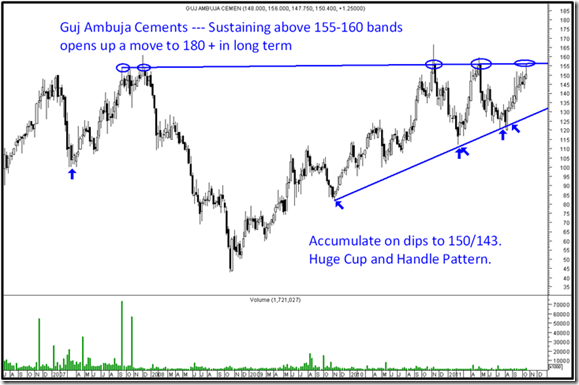 è The stock is forming a huge cup and handle pattern which gives a minimum target implication of 180.

è Multiple attempts have been made at the resistance band of 155-160 over the last 3 years. In the last 1 year it has already made 3-4 attempts at that resistance levels indicates a very high probability of it being taken of and the stock going into uncharted territory.