Although i have been recommending the stock many a times on this site. We earlier initiated a buy around 68-73 before the dividend being announced. Booked out major quantity at 90 taking a cautious stance on announcement.

For the past many months we have been advising clients to accumulate the stock between 44-38 with a medium to long term view.

Lets look into a little brief about what did the company do.

2) The promoter did not take any non compete fee. One should definitely read this interview.

3) After the dissociation from D Link India the promoter had 62 %.

4) The company is getting back into the Active Networking business which it was doing for last 15 years with the brands DigiSol and Digicare. This can be in conflict with the original business of D Link which was demerged but there is no clause to not allow Smartlink to get into similar business. For the active networking business they would still be using the same set of Regional Distributors and goodwill for last 10-15 years.

Now lets look at a few reasons to buy the stock.

1) The promoter had 62% share in the Smartlink entity post the demerger. This increased from January 2010 to September 2010 to 67.33%. Indian promoters are allowed only 5% increase in stakes in the stock through creeping acquisition. That is a clear positive. Most of this buying was done at a rough average of 50 rs ( Many of the acquisitions have also taken place at 60 + levels ). Promoter has not sold any share since then.

2) The promoter owned the Smartlink brand which he has sold for a consideration of Re 1 instead of taking non compete fees like many other companies have done in such slump sale.

3) In his above interview the promoter mentioned we will stick to the 25% payout of profits. The company was sold for 503 crores. Post tax they would have roughly got around 400 odd crores. The special dividend of 30 bucks means a payout of 90 cr + a tax of around 10-15 crores. This is exactly 25%. This is one of the few promoters who has stuck on his commitment. Also this is by far the largest payout by any indian company. Also the company did stick to its 2 rs dividend. I would expect the company will continue with that. ( if so a 2 rs div would imply a dividend yield of 4-5% )

4) Now let us look at the current results and Statement of Assets and Liabilities sheet as submitted by the company in current quarter results. 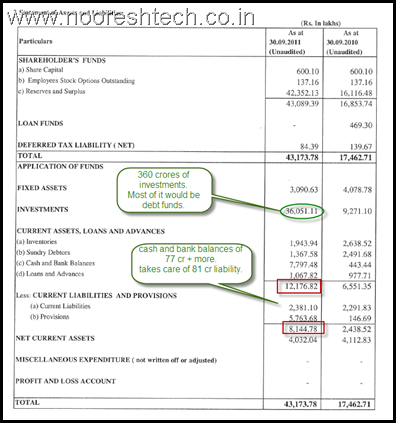 The company has around 360 cr in investments.

That implies cash of easily 300-360 crores. This would generate and income of 25-30 crores

5) The company posted a loss of around 7 cr ( need to check here how much more would they keep losing in setting up the current business ). Assuming the losses would continue for some time to come but that may be taken care by the interest income. Also with such a huge cash reserve it may be able to turn the business profitable faster.

So overall the company has 300-360 cr of cash and cash equivalents. Apart from that the company may have other fixed assets and relationships built over last many years.

The current market cap of 140 crores gives a good amount of safety.

1) The control of the company remains with the promoter and he can utilize the cash as he wants. Will he do some stupid capex like Indo Asian Fuse gear or put their money into markets like Gwalior Chemicals or become a P-E fund like Piramal Healthcare ( I like this story at 360-320 will cover in further posts).

2) The company goes into a large capex in the business of Digisol/digicare or any other such business which will eat into the capital and one may need to be patient.

3) The company keeps doing stupid expenses to siphon of money without giving benefit to the shareholders.

1) Mr K R Naik said if he cant find a way to utilize the cash he will give it back to the shareholders. Can we expect another special dividend.

2) The company sticks to the dividend policy and gives 2 bucks next year.

3) The company is able to crack big in the field of active networking and starts making profits. Suddenly people will value the cash as well as the earnings. Any disclosure of the further plan if liked by the market will lift the stock quickly.

4) The liquidity is too low with 67 % promoter and another 3 % with investors. Also would expect few more un official investors. Any big buying can reduce the valuation gap

At the current market cap of 130-140 crores against a cash of 300-360 crores the stock seems grossly undervalued. If one values the credibility and ability of the management ( which i very well do ) then all the benefits outweigh all the negatives. Also the company sticking to their field of expertise makes us increase the belief in the company. Till now the promoters have done everything by the book in terms of disclosures , dividends only thing missing is the future plans.

All in all we believe the downside could be limited but on more clarity from the management the stock can easily move up 50-100% over the next 1-2 years ( can do more also ).

Dislcosure: We have exposure in the stock as well as recommended to clients at 38-42 levels recently in our Investment Portfolio ( To Subscribe click here  ) - There would be an obvious bias. Please do your own research as the above nos are a quick approximation.