Will it panic when every body expects it !! 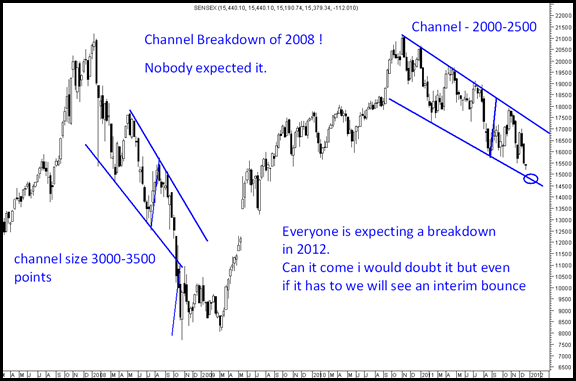 This has been one comparison which has been scaring me as an analyst as well as everyone on the street seems to be pretty confident of such a breakdown being played out before market bottoms out.

The previous channel was around 3000 and breakdown at 11000. This move led to a fall to 8000 levels which was more over accentuated with the news flow at that time.

Now currently we have a 2000 points channel for which a breakout point comes to 14800 that gives a drop to 12800-13000 levels in case of some adverse announcement or out of the blue scenario.

The previous bear cycle of 2008 had seen a lot of froth being created in 2007 with lot of margin pressures and that was precisely the reason for a deeper correction. In comparison to 2008 we have already spent 13 months in the current cycle almost equivalent to the previous cycle so i would term this a consolidation.

In the last 6-7 years of my experience i have never seen such a strong bearish consensus. A last bullish consensus was in 2007 🙂

Market tends to surprise the consensus.

Index may or may not go 13k and 3800-4000 levels but many stocks are on their way. So as an investor prepare for notional losses of 15-20% on the portfolio provided you have stuck to quality stocks and be ready to buy slowly in panics.

One of my favorites Aditya Birla Nuvo is down 760 😛 i expect 800-820 as a bottom is giving a good opportunity to buy. its a pure funda call ( technically its pretty weak can do 720 also )