In our previous post Equity–Never been so Bad so Quick. What Next ? we looked at how the current fall has been the fastest and deepest in a long time.

Although every Bear Market where Index falls 30-60% and Broader Markets 40-70% is different but what we have noticed is the consolidations have some similarity.

A consolidation after a big market fall has some common characteristics.

A trend change is confirmed whenever intermediate highs are crossed and trendline breakouts.

This is a Long Post . Do read till the end.

Let us start with 1992 Fall. We do not have a lot of stock data but will only look at the index.

Generally the fall after a bull market can retrace 50-61.8% of the Bull Market.

From the first fall the consolidation forming a falling wedge/triangle lasted almost a year or 49 weeks.

When A confirmation came when the downward trendline and higher top was made August 1993. In the next 1 year the Sensex reclaimed previous highs.

Generally 50% of the stocks do not make new lows in the consolidation as broader market trends to overshoot on the downside in the first fall itself.

The first fall did pause around the 61.8% mark. But post a recovery it again made 3 new bottoms and made a full retracement.

After making a major bottom in September 2001 and a 40% bounce from the lows it made 2 higher bottoms.
The Consolidation lasted 3 years from the 1st bottom and almost 2 years from the final bottom made in Sept 2001.

A trendline breakout from a triangle and a higher high happened in mid of 2003 and the Index went back to same highs in the next 6-8 months.

( The data is only NSE and has a lot of survivorship bias as it does not consider companies delisted, demerged. Also many companies used to be only listed on BSE) 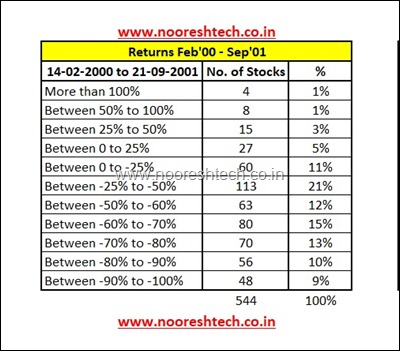 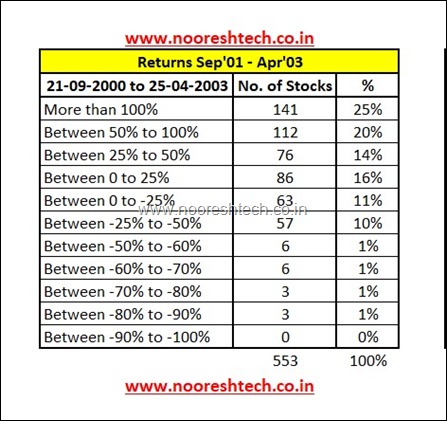 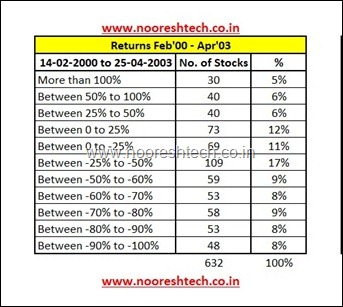 Fall and Consolidation of 2008

The fall was huge as it retraced almost 75% of the move. But also the rally was huge as well with Indices up 7x from the lows of 2003.

Lasted only for 5-6 months from October 27th to March 2009 with almost similar bottoms on closing basis and 5-10% higher on lows. 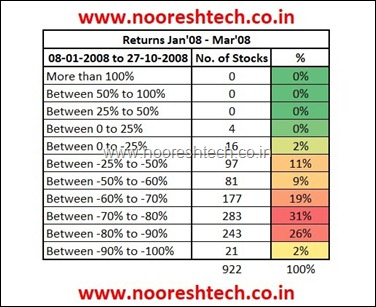 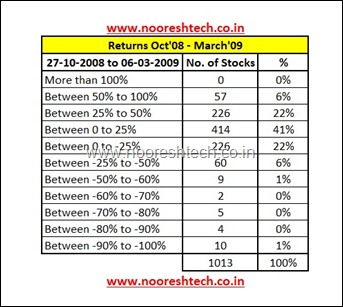 Real Estate/Infra got whacked 70-90% in 2008 and Capital Goods also has been an underperformer ever since. FMCG,Pharma, Consumers. Home Building Materials, Chemicals, Banks and Financials took lead in the coming decade.

The big question is have we made the bottom , or the next bottom would be a double dip or we have a few more legs to go. The retracement has been large just like previous bear market but its not a 60% fall like 1992/2000/2008. So for that reason most bearish expectations are placed at 6400-8500 where 6400 is the peak of 2008. But the stock behaviour is very close to the falls of 1992/2000/2008. That suggests we are getting into consolidation and may have just one more down leg which might have started from 9900. 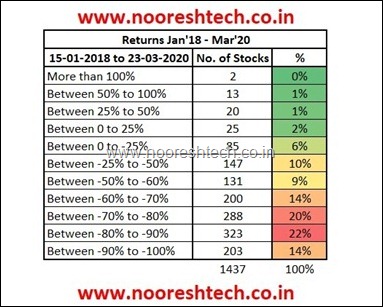 Price damage is almost similar to 2008.

Out of previous sectoral changes what we have seen is some thoughts to catch the next sector. New Sectors may have many new listings or companies who come out of nowhere or transform. Wipro was not an IT co.

Going forward it would be a good time to look at laggards and new sectors or even Old Heroes which have survived. Price Action will be an important thing watch along with Sector Reasons,.

4) Chemicals were commodity companies and did nothing for 2 decades and now are speciality companies.

What Next – My Thoughts?

Made money doing Promotions for Dot Com Companies and Marketing Surveys for Brands in 2000-2001. By 2002 when I joined engineering there were hardly any placements. We had previous year graduates as our Teachers due to lack of opportunities. I used to earn more than 50% of an Engineers pay giving Private Tuitions for a couple of hours daily. By 2005 a majority of our batch was placed with jobs in 3rd year of Engineering and results of 5 semesters. Was on Bench for 90% of my 6 months IT Job in 2006.2007 was a super bull year and business did well for us. By 2008-2009 Engineering Grads and MBAs had a tough time getting a job and even Job offers got delayed.Friends in US had to do odd jobs after Masters for some time.  A lot of people got laid off in 2008-2009 but luckily it did not last long. Portfolio got hit, Business hit and some money stuck in a Co-Op Bank which got taken over by a PSU Bank.  2011-2013 some layoffs happed in Equity Broking Cos. The whole model of Sub Broking got damaged who were a big set of our clients. Started a venture in Broking and closed in 6 months. By 2013 Portfolio,Business got hit. 2014-2017 was prosperous for many industries especially Equities. Since 2018 its been tough for people like me in Equities and post Covid19 is going to be tough for a lot of Businesses.

2)    How to Analyse Delivery Volumes

Please mail us interesting topics you would like us to cover.

Finally created an Online Course which has 10-12 hours of Video Content. May add more also on suggestions.